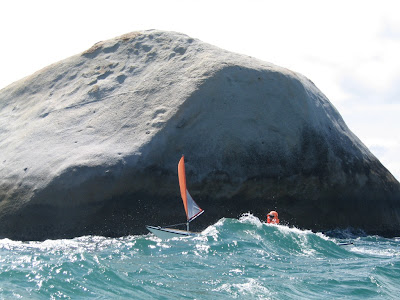 The Images above and below appeared in the latest issue of Ocean Paddler issue 30. These were included in an article on basic sailing safety tips that I wrote for the magazine.

These pictures were taken by Sharon Betteridge and Shaan Gresser respectively and along with an excellent picture of yours truly by Andrew Eddy were included in the final proof without credits. I apologise to all three for this omission and thank them for the way their photographic contributions enhance the article.

For the record; the image above shows Andrew Eddy Sailing through a jumble of very big granite boulders off Cape Melville on Cape York. Below, Matt Bezzina and Mark Schroeder sailing from Broughton Island enroute to Seal Rocks abeam to a brisk southeasterly. 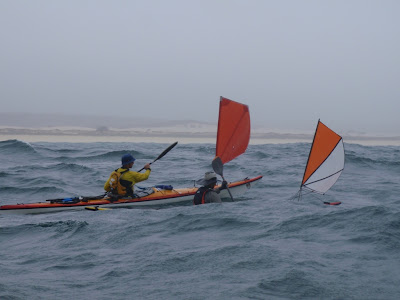 Posted by Rob Mercer - The Balanced Boater at 5:34 PM 1 comment: 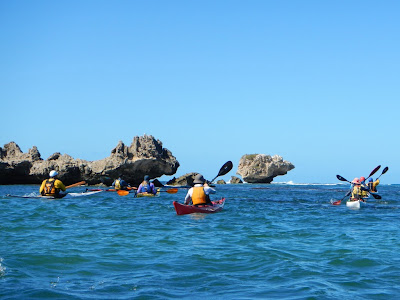 Above: Approaching Cape Peron.
When Les Allen called me with an invitation to the inaugural Western Australian Sea Kayak Symposium I knew I was committing to more than just a good idea. Les is one of those rare individuals who make things happen rather than waiting for someone else to do it so I wasn’t surprised when the initial discussion was backed up very quickly with venue, times, permits, accommodation and session details. Presenters and Instructors were lined up and registrations started to pour into WA Sea Kayak Symposium Central a.k.a Les and Jo’s place at Rockingham. Between them they tackled the mountain of work that you can only appreciate if you have been involved in organising a kayaking activity of this scale.
Paddlers from as far away as Norway, hundreds of miles north and south and thousands of miles east of Perth converged on the outdoor rec camp along with locals. I don’t think anybody knew exactly what to expect but the adventurous spirit that seems to abound in kayakers was well rewarded with an intricate coastline, impressive wildlife and an excellent self contained venue right on the beach. The open air dining area with uninterrupted coastal views was a natural meeting point and provided a great backdrop to mealtimes and talks. 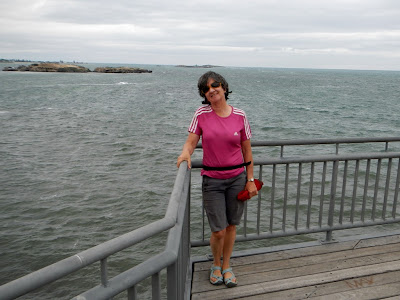 Above: Sharon enjoying the views on a short walk from the dining room. 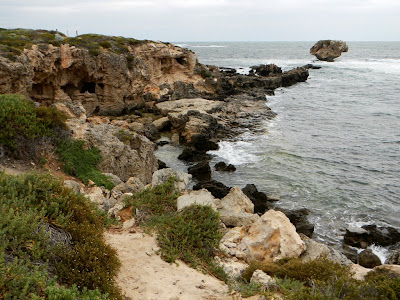 After registrations and a hearty meal we sat down to a presentation by Sandy Robson. Sandy gave us a beautiful and inspiring account of the first leg of her project to retrace the Epic voyage of Oskar Speck. Her quirky humour and insights about the people she met along the way made this a very engaging talk and one not to be missed when she makes a guest appearance at NSWSKC Rock n Roll this year. 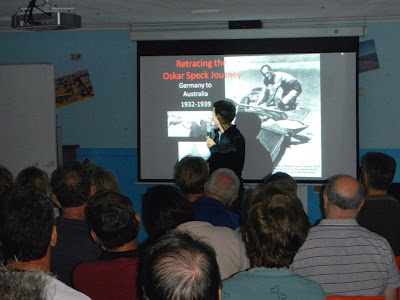 Above: Sandy's Presentation .
With a strong wind warning issued for Saturday, Les faced the tough decision of keeping everyone close to shore on the sheltered side of Cape Peron for the day. On the upside this allowed for large groups to share instructors and experience a range of approaches and presentation styles.
After lunch Les jumped into his trusty Greenland T while I offered a commentary about different approaches to rolling. Les showed us some traditional and more contemporary rolls and braces and topped it all with an excellent demonstration of rolling with a “walrus” on the rear deck. I joined in with some forward finishing rolls and braces and a little upside down paddling and then it was time for everyone to grab an instructor or mentor and give it a try.
The test of a good sea kayaking weekend is how tired the group looks after dinner on Saturday night. This isn’t the “sitting in the traffic “or “hard day at the office” kind of tired, this is more the contented tired that comes from salt water, sun and serious fun.
It is also a hard gig to stand in front this sleepy but polite group of paddlers and entertain them with more talk about kayaking. Sharon and I had quick chat and decided that her Cape York talk and My North Reef talk might disappear in a chorus of snores so I put up some short videos of paddling around Sydney and explained the local scene; it kept everyone awake for about an hour. A cuppa and short rundown on the North Reef Expedition for those who wanted some more and we were off the hook. 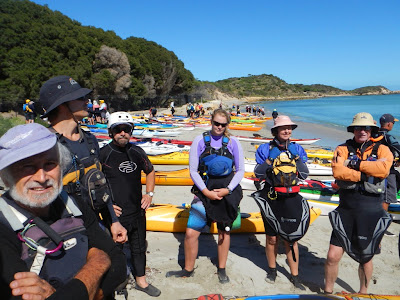 Above: Part of my Saturday group, including instructors John, Matt and Keely and prolific Sydney paddlers Rae and Neil.

Sunday morning dawned bright and calm so most paddlers opted for organised paddles to the aptly named Seal and or Penguin Islands. Despite the forecast for 3metre swells, there is an extensive offshore reef that parallels the coast and this reduced the ocean swells to playful waves spilling on the near shore rock platforms. The “seals” on Seal Island are actually Western Australian Sea Lions and we were lucky enough to see these massive beasts just hanging around on their private beach. 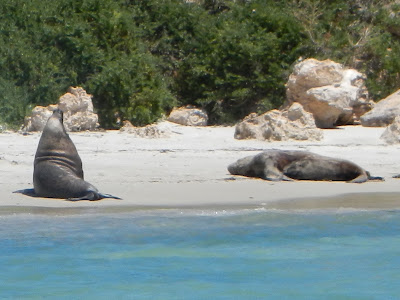 Playful waves on the rock platforms near Cape Peron.
From an outsiders perspective the weekend was a real success, 75 Paddlers including many from rival WA clubs met on neutral turf to compare notes, discuss skills and find common ground, new networks were formed and plans for future adventures were hatched. Significantly most of the talk over the final lunch was all about arrangements and suggestions for WA Symposium 2013. Based on the success of the 2012 gathering, the future of this event now looks very certain indeed. Congratulations Les and on a personal note a big thanks to Les, Jo and all the local instructors and paddlers who made Sharon and I feel so welcome. 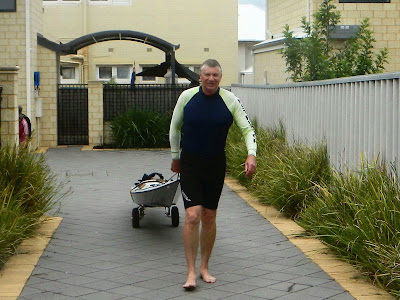 Above: Les Allen, a happy man off for a rolling and skills session. The beach is an easy stroll from his front door.
Posted by Rob Mercer - The Balanced Boater at 4:05 PM No comments: