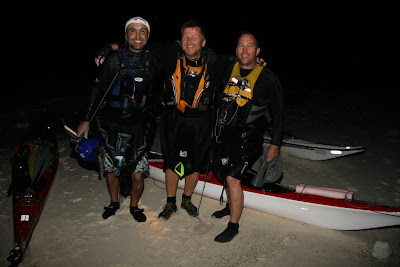 At 7.24pm on Tuesday I received the phone call I had been waiting for all day as a very relieved Gary Forest, Eddie Safarik and Paul Wilton recounted the travails of their big crossing from Sandy Cape to Lady Elliot Island.
In a straight line this is 85kms of open water and about the same distance paralleling the coast. Apart from the likelihood that this is a kayaking ''first", the group were initially drawn to it because of the unique paddling environment to be found at the maritime crossroads between Fraser Island and the southern tip of the Great Barrier Reef.
Like many other points of convergence between major geographical features around the world, the turbulent waters filling the void between the worlds largest sand island and the world's largest reef system are notorious among mariners for producing difficult conditions. To this you need to add the 35kms of shifting bars and shoaling water known as the Breaksea Spit that runs North of Fraser. In his famous guide for cruising yachts Alan Lucas says of the area to the north of Sandy Cape: "the most predictable currents on this chart are those setting across the Breaksea Spit. It is dangerous to underestimate their strength which easily reach 2.5knots in places and will cause a heavy break against an easterly swell."
The boys were well prepared but challenged by the intensity and relentlessness of the conditions. As well as a 2-3m easterly swell they had winds at the upper end of the forecast with ESE gusting 20-32knots all day (Lady Elliot AWS). The resulting sea worked across the swell and currents to kick up a churning surface with breaking waves and almost constant clapotis. To make matters worse, rain reduced visibility and robbed them of the moonlight they were relying on for a visual horizon before sunrise. As a group they battled with: seasickness, exhaustion, an extremely inquisitive 4 metre Mako shark, another that tried to rip the paddle from Gary's hands in the darkness, and a trawler that almost ran over them on dusk.
The final tally on their GPS was 95kms in just under 17 grueling hours. When I asked Gary about the extra 10kms he said most of it was the aggregation of short detours as they were broached off course by breaking swells and intersecting wave patterns.
These are committed sea kayakers who trained diligently to prepare for their trip through the Bunker Group. I know they have done some long days in bumpy conditions and some serious technical paddling in big surf and on turbulent river bars, so when they talk of numerous capsizes and frequent support strokes it is very clear to me that this is an extremely difficult stretch of water and it is not just the sheer distance offshore that has kept Lady Elliot out of reach of kayaks for so long.
When I spoke to the team yesterday after a good nights rest they spoke in awe of the heavy conditions and relentless white water. Eddie spoke of the wild beauty of the seascape and the images of boats perched high on steep and twisting wave faces; images not captured on film in such difficult circumstances but vivid in his words, but the overwhelming feeling they all shared was pride and relief that the group stuck together and helped one another through this epic day on the water.
They intend to head off in light conditions for a comparatively "short" 40km crossing to Lady Musgrave Island tomorrow as they work their way north through the Bunker Group.
This trip is shaping up to be a classic Aussie adventure and this begs the question; Have these guys discovered another paddling icon? Is this the Queensland answer to Bass Strait?
Posted by Rob Mercer - The Balanced Boater at 10:33 PM No comments: