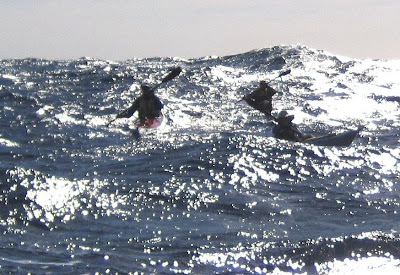 I believe that developing sea kayaking skills requires time on the sea, if you stay in the bay it's just kayaking.
Sometimes the best learning is "experiential" with the Instructor setting the scene, managing the risks and leaving the rest for the participants to sort out by engaging with the conditions. For this to work the sea state has to be challenging enough to demand the use of occasional support and control strokes: techniques that can seem irrelevant or contrived on flat water. For most paddlers these strokes just don't make much sense until you add moving water and some fresh breeze.

From an instructor's point of view there is a fine line between challenging conditions that raise skill levels and placing people in a fearful environment where they tend to lock up and only remember being frightened. To address this and make sure individuals could easily communicate how they were feeling I explained how everyone could rank their challenge/fear factor on a scale from one to ten with 0ne equal to sitting in the bathtub and ten being; ''get a helicopter out here now!''

So with the forecast for last weekend a little too big for our scheduled Beecroft overnighter I offered members of the NSWSKC an alternative day trip looking for whales in some lively conditions along the cliffs and exposed coast just south of Sydney. The BOM forecast for Sunday was for 3 metre southerly swells, winds south west at 15-25 Knots and seas 2-3metres (Winds and sea trending down slightly during the day).
As the group assembled at the edge of the sheltered waters at Bonnie Vale it was hard to believe that there was any wind but high up on the ridge to the south of Bundeena branches were bending and every few minutes the glassy waters would suddenly pile up and spilling waves would light up the location of sand bars as the larger sets of southerly swells bent around Jibbon Point and rolled up Port Hacking heading west toward Maianbar.

Everything pointed to an active sea state off the Royal National Park cliffs and with reports of large pods of Humpback whales heading close along this stretch of coast, expectations were high for a great day on the water.

As for the whales; we saw them spout, splash and breach briefly and sometimes they were quite close but the swell and sea made it hard to see them for long enough to snap photographic evidence, fortunately the paddlers were far easier to capture with the lens. 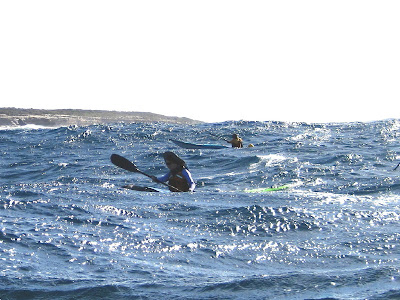 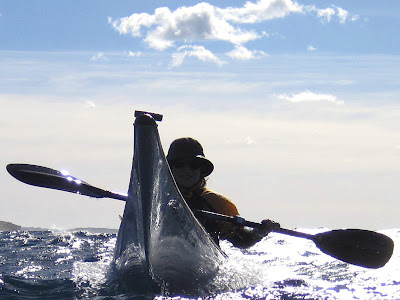 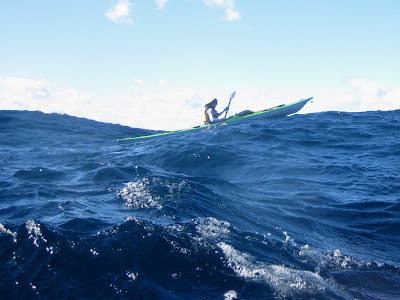 From my sheltered position in a trough the waves look a lot smoother but Sharon looks very windswept as she climbs to the adjoining crest. 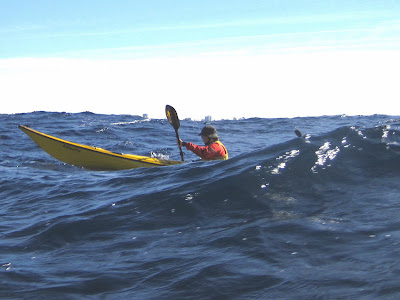 Gina seems to be enjoying the swells. You can just see the tops of the buildings behind Cronulla Beach in the background. 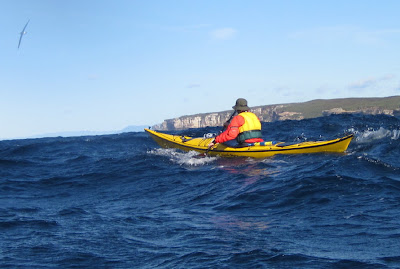 Gina with Albatross escort (top left) looks south along the Royal National Park cliffs toward Wattamolla with Wollongong on the horizon. 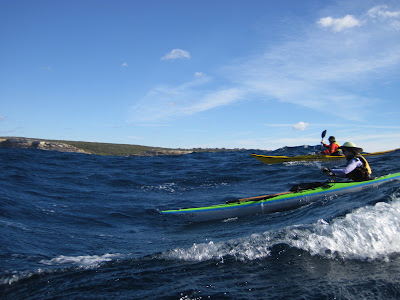 Sharon riding down the back of an oncoming wave. 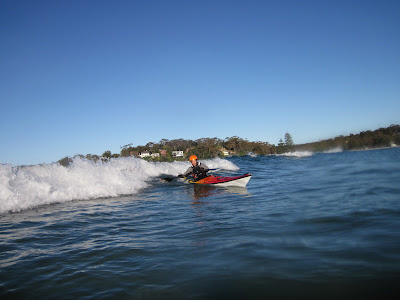 By mid afternoon we were back at Bonnie Vale and the flood tide had taken some of the power out of the bay surf but there were still a few easy rides on offer. It takes a powerful southerly swell to keep things spilling this far inshore. (Above Matt Bezzina takes a well earned break from Sea leader duties.) 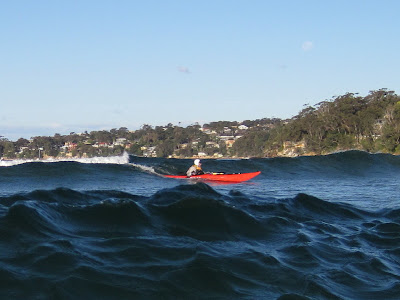 Owen relaxing in the zone and enjoying the responsiveness of his sporty new boat. 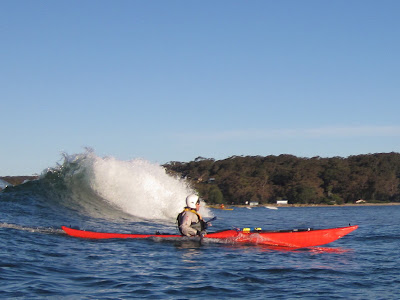 Special Thanks to Sea Leaders Matt and Owen for the their essential role in making this a safe and effective Day.

Posted by Rob Mercer - The Balanced Boater at 6:28 PM No comments: