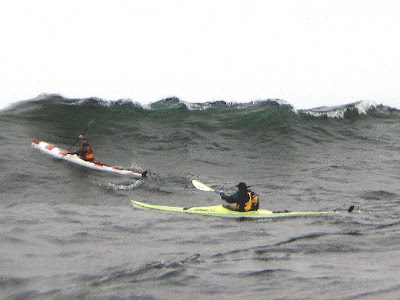 Posted by Rob Mercer - The Balanced Boater at 9:21 PM No comments:

All too often a brace is a brake, a defensive drag against the water and a sure fire way to slow down, and yet ironically some paddlers try to apply it at the exact moment they are wanting to go faster.

The "No Brace" is simply my way of describing the technique of not responding to acceleration or directional drift with a defensive stroke. It is a bit like learning not to hit the brakes when your car loses grip and starts to slide on a wet or icy road. As in the car analogy, sudden deceleration tends to make the impending loss of control into an inevitability.

The first step in developing a good No Brace is to to sit on the shore before your next paddle in following seas and challenge yourself not to drag the blade behind you in a trailing brace to hold your line. Instead, when you feel a wave lift you and the boat starts to slide, just keep paddling, try to take off very square to the steepest part of the wave and only use sweeps, edges and forward strokes. When your experience tells you to hunker down with a trailing brace or rudder ignore it and put in a big sweep on the other side, instead of being defensive, focus on staying in control by maintaining drive!

The ''No Brace'' could also be described as the "body brace" in that you can brace against the heeling force of a wave with your hips or even hips and knees and simply maintain a good stroke. Remember to be patient, despite the car analogy above, course corrections take time in any boat, and you may have to wait a second or two for the edge to bite or the sweep to take effect.

An interesting technique in developing a good No Brace is to paddle abeam to trains of short steep, closely spaced overtopping waves on a windy day in an area of short fetch like a wide bay, see if you can paddle a perpendicular course without using the paddle as a crutch, use only sweep and forward power strokes while you do all the bracing with your hips and knees. Your cadence will need to change so you can meet the oncoming crests with a good strong catch and some of your strokes will have to be carefully placed over the high side gunwale, and timed so as not to trip you up, but the emphasis on bracing without having to stop paddling is a valuable skill to acquire.

When your "no brace" is working well you will get those extra couple of valuable strokes in at the take off point in a running sea instead of putting on the brakes. Even when rudder strokes become unavoidable you need to keep them crisp and decisive, feel for a blade angle that moves the stern without hauling on the brakes and creating excess drag. An effective stern rudder looks and feels very different to a heavy trailing brace and in a running sea will often get you back on line in the time it takes to make one forward stroke.


The less you use the stern rudder, the less you need it and linking rides by building up speed from consecutive waves will get easier. As a novice sea paddler I can remember being a lot busier than my more experienced mentors especially in following seas and then I learnt the "No Brace"; real life proof that "less is more".
Posted by Rob Mercer - The Balanced Boater at 7:29 PM No comments: