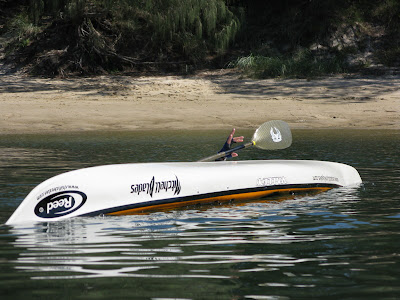 (Above: posed rolls in flat water are only the beginning. Photo: Sharon Betteridge)

During skills assessments I always take the time to remind participants of the artificial nature of certification, after all it is the skill and judgement and not the piece of paper that matter. In a tricky situation the most futile strategy would surely be to wave your nicely printed certificate at an angry sea.

Just the same, a valid assessment provides a good opportunity to demonstrate both physical and communication skills in swell, sea and surf. The best rolls happen spontaneously and effective boat control is proven during rescues or other realistic tasks at sea. It is simply not possible to second guess how paddlers with apparently solid skills on the flat will adapt to dynamic water; some paddlers who work with the waves actually look better when it is lively whilst others operate with little or no feel for the sea. To 'keep it real' I often postpone assessments because the day offers too few or too many challenges.

Last Wednesday I drove past twenty of Sydney's favourite ocean beaches through heavy traffic, en route to Barrenjoey. The reason for the extra drive was a heavy 2-3 metre southerly groundswell that was hammering the open coast producing surf way beyond the: ''surf to 1 metre" specified in the award.

The extra driving provided us with a short paddle to surrounding headlands where we worked through rescue and towing scenarios in rebound and a freshening sea breeze. These activities were intensive but not unrealistic when you consider how often rescues, self rescues and towing happen in clusters in real life. At lunch we negotiated the surf at Umina Beach and as planned, the waves were worn down to manageable size by the natural breakwaters of Broken Bay, Lion Island and the reef off the southern point.

Sitting off the point of Umina it was still hard to imagine that the two metre plus mounds rolling under our boats had really lost much power as they pounded the middle of the beach and everyone seemed pleased with the easier landing through smaller surf and reflected waves close to "kiddies corner". After lunch and a stretch we took to the surf to demonstrate support strokes,control strokes and rolls. By this time the break zone had become more erratic with onshore wind chopping up the surface and a few rips cutting across the break to add an element of surprise.

The debrief is always a tough time for me. There are clear guidelines for the assessor and all the boxes need to be ticked for a successful performance. This is easy when you are reading through the document in a comfy chair at home, but on the day, there are always many shades of grey. As always the big hurdles seem to be surf and the reentry and roll in open water. These are also the easiest ones for the assessor; a roll that doesn't finish with the paddler upright is is obviously not working no matter how you view it and support strokes that don't work in small waves are also pretty plain to see. What is harder to measure is the attitude that will make a safe sea paddler. Fellow assessor Stuart Trueman once commented that skills without judgement just increase the ability to find trouble and if we focus on self rescue as the answer to every situation then some paddlers will make their plans based on getting out of trouble rather than staying out of trouble in the first place.

At the end of a long day, despite a generally strong performance everyone still had some work to do to complete their assessment, so it was rewarding that the group viewed the exercise as a valuable learning experience in its own right and a chance to take stock of personal progress. Beyond the piece of paper it is this self awareness that will stand these paddlers in good stead as they "make the grade".
Posted by Rob Mercer - The Balanced Boater at 5:34 AM No comments: 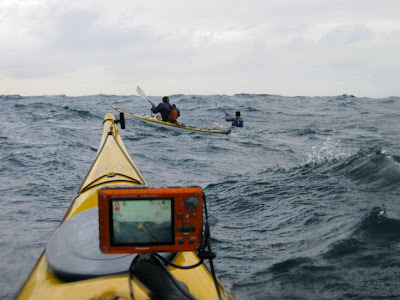 Recent winter westerlies and pulses of groundswell have created some clean and heavy surf against the coast. Serious surfers live for the alignment of these wind and swell events but for sea kayakers these conditions mean hard launch/landings on open beaches and a perilous slog across embayments or when returning from offshore islands.

In contrast, the onshore winds that shred the swells and ruin the surf, also kick up steep sided wind waves right against the coast providing hectic but often enjoyable kayaking conditions.

In deep water the rounder and more majestic swells travel far faster than we can paddle. According to the "Users Guide to Australian Coast"*, deep water swell waves with a 15 second period between crests will have a wavelength of 350metres and be travelling at 45knots! These are the impossible rides we try to catch as they roll under us at sea, and by the time they are are slow enough to catch they are in shallow water with almost vertical or barrelling faces that munch sea kayaks.

By comparison, even large wind waves of comparable height produced by a recent change will travel at only a fraction of the local wind speed thus providing steep close spaced waves that may travel within the sprint range of kayaks and other paddle craft and dissipate into foamy turbulence when they approach the beach.

So local winds produce waves that are steep, relatively slow, and close together even in deep water. When these winds are onshore, typically from the southeast or northeast, we are fully exposed as soon as we reach the sea and with careful planning or good luck we can often enjoy a downhill ride home at the end of our exertions.

The following shots were taken paddling into a fresh ENEaster earlier this week, there was almost no underlying swell off Sydney so almost all the wave action was the result of existing local conditions. When we had finished our workout we turned downwind and the following seas provided some excellent runners for everyone. There are no downwind images because :

1) The return paddle was over too fast.

2) I was having too much fun to take photos.

3) I was too busy listening to the skeg hum. 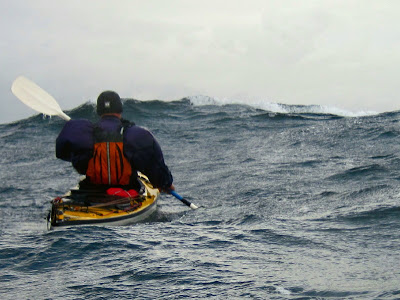 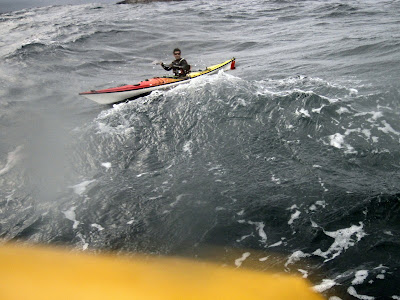 Note the difference in elevation between Matt and I. This is a good indicator that things are getting steeper. 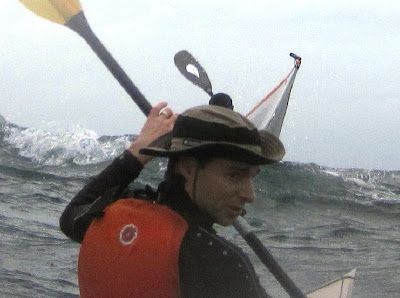 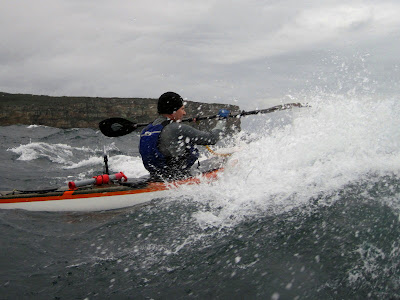 Alan about to get wet. Sooner or later the toppling crests dont break somewhere else.


*For an excellent discussion of wind, waves and swell see "The Users Guide To The Australian Coast" by Greg Laughlin, New Holland Press 1997.
Posted by Rob Mercer - The Balanced Boater at 1:40 AM No comments:

This week I cancelled my Tuesday night paddle and headed to the Blue Mountains for the launch of Vicki McAuley's book, SOLO.When I returned home just on midnight I started reading and after just a few pages I was compelled to read the whole book in one long sleepless sitting, I simply couldnt put it down.

The book stands as Vicki's personal tribute to husband Andrew McAuley and a chronicle of her personal voyage as she learns to live with her loss and find the courage to keep going.

It is a powerful and honest account and through the pages you get the feeling that Andrew's spirit of optimism and passion continues to support and inspire her. It is an exploration of what drives an extreme adventurer written by the person who knew him best.

Many modern adventurers claim to be ordinary folks who just want to do extraordinary things but this book avoids this cliche to present Andrew as a gifted natural athlete driven by an impulse to explore the limits of human performance. To those of us who paddled with him at one time or another I think this is a far more honest appraisal; he really was an elite adventurer without being elitist.

Anecdotes covering earlier kayaking expeditions and climbing adventures are interwoven into the text to illuminate the bigger issues of outdoor adventure, self sufficiency, and community attitudes to risk. Also included in the book are emails and letters that cover a broad range of opinions along with Vicki's responses, but the key to the success of the book lies in her willingness to write from the heart.

It has been famously said of adventurers that if you need to ask the question then you will never understand the answer. For those who ponder these issues Vicki's brave words will help to enlighten.

If you buy a copy through the EK website, Vicki receives all the proceeds.
Posted by Rob Mercer - The Balanced Boater at 1:31 AM 3 comments: