Oscar's comment on my last blog prompted me to write this as I have been asked this question about hand held and fixed cameras many times before. First let me confess to knowing very little about the technical craft of photography and relying heavily on the ingenious technologies built into modern waterproof compacts, especially image stabilisation and auto focus.
All my still shots from the kayak are taken using a handlheld compact camera. When you see a camera mounted on the foredeck in some shots it is there to capture video for the EK website or Mark's Vimeo channel, fixed cameras work pretty well for video.

By using a handheld camera I can quickly change my point of veiw and shoot from as high as my outstretched arm will reach all the way down to just off the surface of the water. I try to avoid too many bow shots except when I think it will create a sense of proximity to the subject or add interest in some way.

I have tried using continuos shooting modes with fixed cameras but have discovered that the boat moves far more than my head or my hand producing mostly blurred and poorly framed images. The exception being self portrait type shots that work with a fixed setup where the boat and I are moving at the same rate.

My motivation is always to try for images that convey something of how it really looked from the seat of my kayak on the day so I can share some of the beauty and drama that I encounter at sea.

In my efforts to capture shots that depict sea kayakers in action I have found the following to be helpful:

Finally remember that when you are taking photographs you are often breaking a golden rule by turning your back to the sea so keep a lookout and be alert for warnings from paddlers looking over your shoulder towards the incoming waves.
Posted by Rob Mercer - The Balanced Boater at 11:23 PM 2 comments:

Matt and Fernando paddle backwards watching out for the big ones. 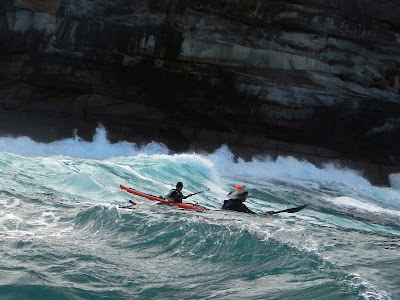 Matt and Fernando surf to seaward. 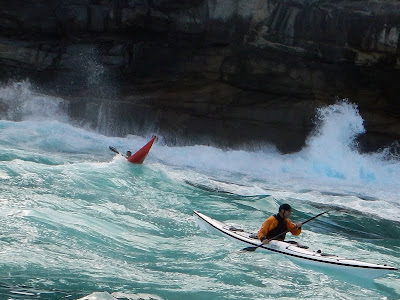 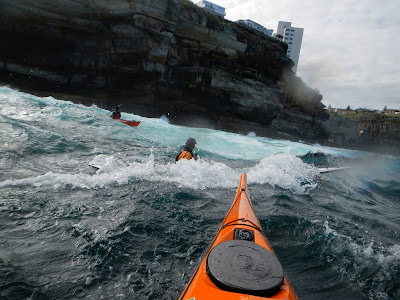 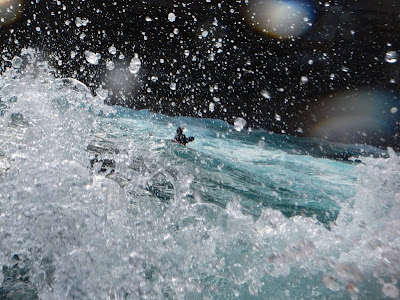 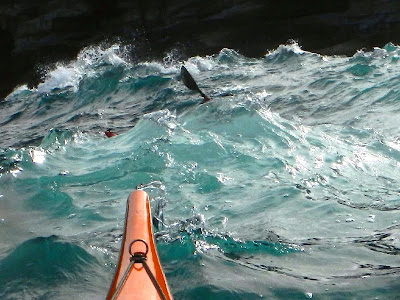 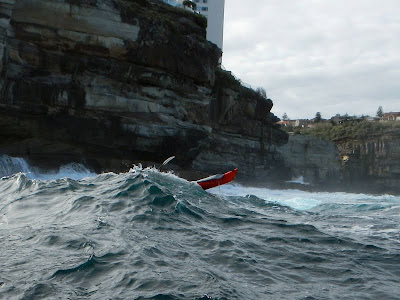 Along the coast at Dover Heights there is deep water right up to the cliff face. Add a fat easterly swell to a light southerly wind and you can find some interesting multi directional water along this stretch.

Local knowledge is invaulauble in a spot like this. Matt grew up living along these cliffs and most of the group have paddled here many times before. We know that, with the right combination of current and swell, there are a series of very predictable long shore rips that drain to the headlands at either end of this cliffy embayment and then out to sea.

Yesterday these factors allowed us surf the rebound and just generally bounce around at the base of the cliffs, cautiously confident that most of the wave energy was driving us away from the rocks.
Posted by Rob Mercer - The Balanced Boater at 3:30 PM 1 comment: