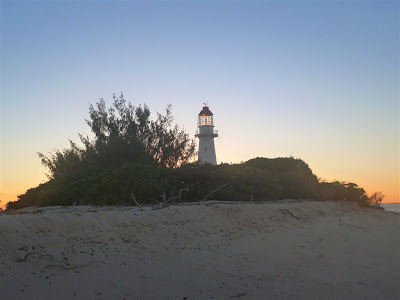 We arrive at North Reef with the last colours of dusk, the surf sounding ever more alarming as it works against the fringing reef. With a heavy break to starboard we probe the lee hoping dearly for a gap before we reach the waves that are wrapping around from the other side and obscuring our horizon to seaward. I take a mental snapshot of Chris just outside the impact zone slipping off a large hollow wave that is about to wash through sharp tendrils of coral.

Smiles all round as a clear lead opens up, there is the occasional convergence of waves reunited after travelling the island perimeter from opposite directions but they have spent most of their energy in the process and collide without force. Our boats grind up onto the beach under the darkest of starlit skies.

North Reef ; the namesake of our mini expedition and a convenient turning point for the return to the mainland, is not even an island. Some historical photos show the light house completely surrounded by water with no land around it, others show terra firma but no vegetation and yet others show a very different landfall to the tiny vegetated haven I walk around at first light with camera in hand, trying hard to capture the essence of this wild and beautiful place.

On the south east shoreline, just above the high water mark I find a rusted cable and stout anchor post; evidence of a system of huge guy lines that helped steady the light tower during heavy weather when it sat totally exposed on the coral crest and I wonder how the men who worked on this lighthouse without families and friends felt about North Reef?

The historical record contains the sepia image of a weather beaten lighthouse keeper alongside the following inscription neatly carved in a plate of whalebone:

Was this all they felt for their place of voluntary exile? Or was their lonleliness tempered by moments of awe and feelings of inner quiet like those I enjoy on my morning exploration?

North Reef is nothing without the movement of the waves, the waves are its creator and its reason for being, the lighthouse an enduring signpost on the frontier between deep ocean and the vibrant life cycle of the inner reef.

For me "nothing atoll" is a place of energy and abundance, but then again, its easy for me to savour this idea as I pack my boat seeking another landfall before the next ebbing tide.

Posted by Rob Mercer - The Balanced Boater at 5:55 PM