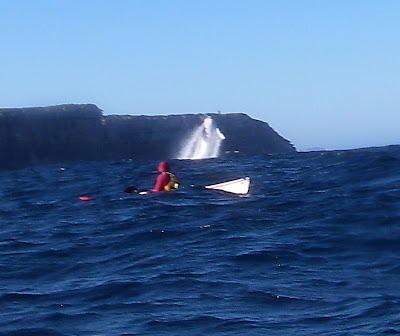 Above: TJ and Whale checking one another out with North Head and Bluefish Point in the background. (photo by Matt Bezzina)

We are always trying to do a little something extra on the Tuesday night paddles.

It is one of the few groups I know of that goes out regardless of the weather and we work on skills, rescues and safety all year round. It is not uncommon to see a few upturned hulls as a wave of spontaneous rolling seizes the group. Within this group there is a rare sense of playfulness that co exists with a healthy respect for the sea. Sometimes we just paddle for the fun of paddling, other times we incorporate a group activity somewhere exposed to the prevailing wind, sea and swell.
This week for example, we decided to head out about .5 to 1 nm off Sydneys North Head in a gentle 10-15knot noreaster. As I looked around the group I realised that all twelve participants had a roll, re entry and roll and good support strokes.
At the agreed point offshore we split into pairs and one from each pair threw their paddle a boat length or so away from them, then capsized, tried to swim while still seated in their boat to retreive their paddle and then roll up. If unssuccessful they wet exited, swam leading the boat to the paddle and performed a reentry and roll.The whole time buddies waiting their turn were keeping a watchful eye and ready to lend a hand.
Some paddlers got it right the first or second time and all the rest managed a reentry and roll before they started working on personal skills in pairs.
Standard rolls, exotic rolls,hand rolls, sculling braces and a range of assisted and unassisted rescues followed when, suddenly, Matt let out one of his legendary blood curdling yells. By the time we had regained our composure we realised that this wasnt a shark sighting or any threat to our safety but instead, a very playful humpback calf having an afternoon frolic under the watchful eye of its very large Mum.
There is an unwritten law that whale watching takes precedence over skills practice and the group moved off following at a respectful distance in awe of one the finest shows of Whale acrobatics I have ever seen. It is a truly a joy to witness these huge and gentle animals launch themselves into the air with such effortless power and a sense of playfulness.
I consider sightings like this as one of the rewards of being competent and willing to extend your range. The better your skills, the more options you have to paddle at sea, and the more you paddle at sea, the more you see.
Posted by Rob Mercer - The Balanced Boater at 6:21 PM