When I first met Simon Maguire in March this year he told me about his plans to paddle from Byron Bay to Newcastle and I knew he was serious. Although he had very little sea experience it was obvious that he was committed and his mental and physical preparations were underway.

That is not to say that Simon and his mate Adrian were making a fuss, in fact I suspect that without a good cause to promote and support they just would have quietly gone about their preparations and launched with as little fanfare as possible.

So after a few months to hone skills and fine tune equipment they set off on a 600km open water paddle facing sea from every quarter, headwinds, landing heavy boats through surf and crunching out the miles when they really needed to.

The hardest part is often making the plan, setting the date and pushing your heavy boat off the beach. I reckon taking that first stroke on day one is a victory in itself because so much needs to be done before this can happen and it is always so much easier to find yet another reason to leave it until next year....

So congratulations Simon and Adrian! An open coastal voyage of this scale is a credit to you and one that you can always view with satisfaction,whilst raising money for a cause and taking a stand in support of victims of crime broadens the significance of your acheivment.

After a 600klm paddle you might be excused for thinking that Simon would want to give himself a break from kayaking? Not according to an SMS he sent yesterday in which he says:'''Keener than ever to paddle and increase my skill level"


For those who would like to know more about Simons and Adrains paddle or VOCAL (Victims
of Crime Assistance League) you can go to: the Manning Kayak Klan and/or the Hunter Kayak Klan websites 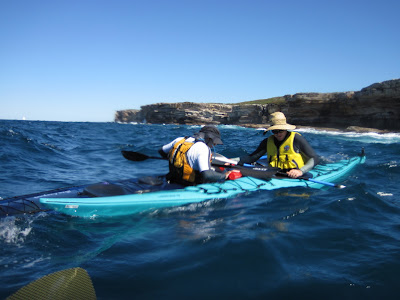 Posted by Rob Mercer - The Balanced Boater at 8:20 PM

Thanks Rob. The sessions I had with you certainly helped me feel a lot more prepared.

The Newcastle to Mallacoota trip is now starting to become more of a reality (http://manningpaddler.ning.com/events/newcastle-to-mallacoota-2010)
All the best and see you on the water for some more sessions soon.
Simon